Before explaining what ACLs are we have to see how traditional UNIX permissions work.

Traditionally, in UNIX, files have three kind of permissions associated to them. Those permissions, called UGO (from User, Group and Others) allow you to set whether a user can read, write or execute a file.

Permissions can only be changed by the owner (or the superuser). The following figure summarizes UGO permissions.

UGO permissions are suitable for most scenarios. However, IEEE POSIX workgroup was conscious that sometimes they are too limiting and defined an interface in POSIX 1003.1e DRAFT 17 intended to manage file ACLs. That proposal was left out from the standard but is implemented in several BSD (Solaris and FreeBSD 5) and GNU/Linux (as of version 2.6 of the kernel).

ACLs allow to set permissions in a per-user or per-group fashion. For instance, it is not feasible in UGO permissions to have two users (bob and alice) where bob can only read, alice can read and write and no other user can access the file. 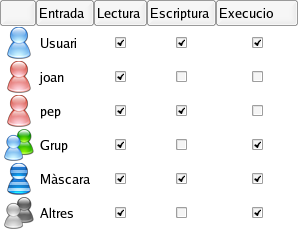